KUALA LUMPUR April 4 – The 1999 Sijil Pelajaran Malaysia (SPM) results have seen an improvement in the overall performance of schools nationwide with 119 of them scoring 100 percent passes compared to 111 schools in 1998.

The number of schools with all candidates getting grade one also increased to 17 from 12 previously.

The number of candidates who obtained the maximum 10 A1s increased almost three times from 65 in 1998 to 189 last year.

In PENANG, six schools registered 100 percent passes, and four of them are Sekolah Menengah Kebangsaan Agama (SMK A).

In a statement, the state Education Department said SMK (A) Al-Irshad, SM Tun Syed Sheh Shahabudin and SMK (A) Al-Mashoor Lelaki were the best as none of their candidates got grade three.

In KEDAH, 15,995 or 70 percent of government school candidates passed the examination, a figure which equals the national passing rate and surpasses the 69.4 percent passes recorded in 1998.

State Education Director Hassan Hashim said the number of first and second graders increased to 26.0 and 24.7 percent respectively from 25.0 and 24.2 percent in 1998.

SM Sains Pokok Sena emerged the top school for the third straight year with all its candidates getting grade one, he said.

In PERAK, its overall passing rate improved by one percentage point while 105 candidates achieved excellent results compared with 83 in 1998.

They are SMK (A) Slim River and SMK (A) Sultan Azlan Shah and the state-run schools of SM Izzuddin Shah and SM Raja Perempuan Taayah.

In JOHOR, the percentage passes improved by 0.4 percentage of a point to 68.6 percent.

According to a statement from the state Education Department, five schools scored 100 percent passes, including three whose students all obtained grade one.

In TERENGGANU, six SMK (A) are among nine schools with 100 percent passes.

The religious schools with 100 percent passes are SMK (A) Sheikh Abdul Malek, SMK (A) Tok Jiring, SMK (A) Batu Rakit, SMK (A) Durian Guling, SMK (A) Wataniah and SMK (A) Nurul Ittifaq.

The others with a perfect record are SM Sains Sultan Mahmud, all of whose students scored grade one, SM Sains Dungun and SM Teknik Kuala Terengganu.

In SABAH, the number of schools with 100 percent passes increased from five to eight.

State Education Director Mohamed Hasan said Sek Men Sains Pasir Puteh, whose students were taking the SPM for the first time, came through with flying colours as 105 of its 106 candidates scored grade one. 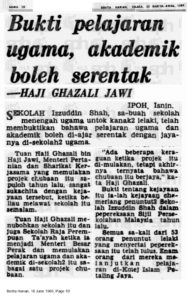